Live the adventure of best places in Sahara Desert Tour with us and spend an unforgettable time.

There are few places in the world that can compete with the spectacular scenery found in the Sahara Desert. The Sahara Desert is the world’s biggest scorching desert, stretching about north-south along Morocco’s eastern border with neighboring Algeria. The Sahara Desert spans an area nearly the size of the United States. Many visitors come to Morocco with the intention of spending a night on the desert beneath the stars. And who can blame them? A desert journey is an once-in-a-lifetime chance that should not be passed up. And here is a list of the places that must be visited for sure in all the Morocco Sahara Tours.

Places to visit during the Morocco Sahara Tour:

The Erg Chebbi is a spectacular sand sea in Morocco’s sahara that extends around 17 miles (28 kilometers) and includes dunes that reaches a height of about 525 feet (160 meters). It is the most famous desert camping spot with in Moroccan Sahara, and it is conveniently located close to the town of Merzouga. It is absolutely worth being started with in this Morocco Sahara Tours list. 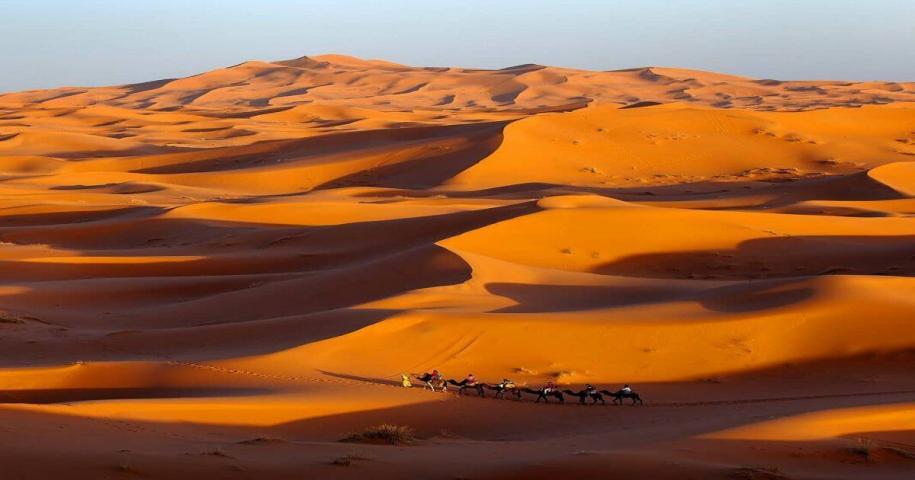 Another best Morocco Sahara Tours destination is Erg Chigaga, Translated from Arabic as Area of Sands, the sweeping views of Erg Chigaga are among the most stunning in the Moroccan Sahara. The campers located among the dunes feel especially isolated, giving Erg Chigaga a fantastic area to appreciate the desert’s spaciousness and quiet.

The Erg Chebbi as well as Erg Chigaga sand dunes are indeed the two primary sand dunes that visitors to the Sahara Desert visit. Each provides a unique experience. The Erg Chebbi sand dunes, being the most popular site, are more accessible, with modern hotels placed directly at the foot of the dunes in the tourist area of Merzouga. This indicates that you can practically leave your lodgings and ride a camel into the wide Sahara in roughly 30 minutes.
The Erg Chigaga dunes provide a more adventurous journey and are ideal for anyone wishing to venture off the beaten path. The travel into the desert is a lengthier, bumpier hike — approximately 2 hours by 44 and half a day camel ride — across the rock-strewn desert till you come to the huge erg, which is located about 60 kilometers from the closest town, M’hamid. It is undoubtedly more difficult to reach, but this means that the fascination of being so isolated is not diminished by people.
However, both dunes provide opportunity to ride a camel, climb dunes, run caramel golden sand grains through your fingers, gaze beautiful sceneries, sleep beneath the stars, and wake up to magnificent sunrises, both are from the best destinations to visit during Morocco Sahara Tours .

Which winds through Morocco’s High Atlas Mountains from southeast of Marrakech to Ouarzazate, is one of the country’s most spectacular and hair-raising journeys. This high mountain route provides breathtaking vistas of the Atlas Mountains around each hairpin curve – and there are many. The road was built for military usage by the French in 1936 and tracks Road Nationale 9 to an elevation of 7,415 feet (2,260 meters) let me know if you love the best places in Sahara Desert Tour.

Few best places in Sahara Desert Tour can match the spectacular sunrises and sunsets seen among the tall sand dunes of Merzouga. This peaceful place in the harsh Sahara Desert nearby Erg Chebbi is famed for its stunning views, camel safaris, and Berber traditions.
The more courageous (and athletic) guests might attempt to scale the huge dunes which surround Merzouga, and the less daring can just choose a 4×4, motorbike, or camel trekking excursion. While finding animals in the dry desert surroundings might be difficult, birders will have plenty of opportunity in the spring when a nearby lake overflows with water and attracts uncommon winged species.

Located on the outskirts of the Sahara Desert near Ouarzazate, Atlas Film Studios is not just the heart of Morocco’s movie industry, but also the world’s largest movie studio. The studios, which were founded in the early 1980s, have an amazing reputation, having held classic film sets such as Gladiator and Star Wars, as well as sequences from Game of Thrones, it is one of best places in Sahara Desert Tours.

Those looking for a traditional Kasbah experience can find it in Amrdil, a 17th-century attraction. Its a well-preserved (and very well repaired) structure provides stunning views of adjacent landscapes, notably the Skoura palm groves, and depicts an ancient way of life that is uncommon to discover anywhere .do it know and book the best Sahara Desert Tour.
Visitors may tour the surroundings of the main sand-colored buildings as well as the famous museum, which contains handcrafted tools, old wells, and traditional bread ovens. It is possible to tour the grounds on your own, but travelers are more likely to come across local and informal guides ready to offer their skills at a fair charge.

Zagora is a city in Morocco’s Draa River Valley, with in country’s southeastern part region, near Mount Zagora in the Little Atlas Area, another destination that best place in Sahara Desert Tour is worth visiting in Morocco.
The remnants of an 11th century Almoravid palace on Mount Zagora and a sign at one end of the city indicating that it would take 52 days to arrive Timbuktu by camel as well as on foot are the primary attractions in Zagora. From Zagora, you may take on camel excursions or go up into the mountains. On Wednesdays and Sundays, there is a vibrant and crowded market.

Kasbah Ait Ben Haddou is one of the areas you pass through on most of the Morocco desert tours.
It is a historic fortress which Unesco has recognized as a World Heritage Site. This Berber settlement, enclosed by a mud wall, is a stunning depiction of the traditional way of life in the desert, which safeguarded the inhabitants’ houses and civilizations. It is important to see its interior with a certified guide.

When is the best time of year to go on for Morocco Sahara Tours?

Between May and October is the finest time to explore the Sahara Desert. Daytime temperatures are cooler during this time period. Nighttime temperatures in the Sahara winter (particularly in December and January) fall below freeze. From January until May, sandstorms are more common. Summer months (late June to early September) may be oppressively hot, with daily highs in July and August sometimes exceeding 50 degrees Celsius (120 degrees Fahrenheit).
A private trip allows you to immerse yourself in Moroccan culture, interact with people on a daily basis, and learn about many of the country’s best-kept secrets from skilled guides. Some of the private excursions we provide Morocco Sahara Tours are here.